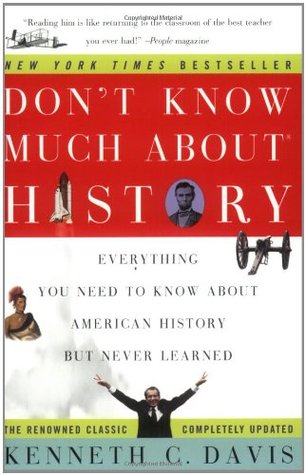 Kenneth C. Davis is the New York Times bestselling author of the Don't Know Much About series of books and audios for adults and children. The first title in the series, Don't Know Much About History became a New York Times bestseller in 1991 and remained on the paperback list for 35 consecutive weeks. It has since been revised several times and now has more than 1.6 million copies in print.

He is, according to Publishers Weekly, "a go-to guy for historical insight and analysis."

AMERICA'S HIDDEN HISTORY also became a New York Times bestseller on publication. A NATION RISING also uses dramatic narratives to tell the "stories your textbooks left out."
His book, THE HIDDEN HISTORY OF AMERICA AT WAR (May 5, 2015) was called "searing" analysis by Publishers Weekly.

Kenneth C. Davis success aptly makes the case that Americans dont hate history, just the dull version they slept through in class. But many of them want to know now because their kids are asking them questions they cant answer. Daviss approach is to refresh us on the subjects we should have learned in school. He does it by busting myths, setting the record straight and always remembering that fun is not a four-word letter word.

His recent book, IN THE SHADOW OF LIBERTY: THE HIDDEN HISTORY OF SLAVERY, FOUR PRESIDENTS, AND FIVE BLACK LIVES looks at the lives of five people enslaved by four of America's most famous Presidents and the role of slavery in American history and the presidency. In May 2018, his book MORE DEADLY THAN WAR: The Hidden History of the Spanish Flu and the First World War was published.

In October 2020, his book STRONGMAN: The Rise of Five Dictators and the Fall of Democracy will be published by Holt.