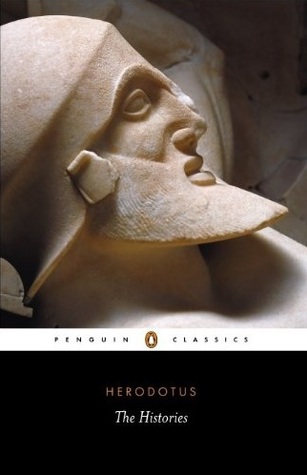 Herodotus was an ancient Greek historian who was born in Halicarnassus, Caria (modern-day Bodrum, Turkey) and lived in the fifth century BCE (c. 484425 BCE). He has been called "The Father of History", as well as "The Father of Lies." He was the first historian known to collect his materials systematically, test their accuracy to a certain extent, and arrange them in a well-constructed and vivid narrative. The Historieshis masterpiece and the only work he is known to have producedis a record of his "inquiry" (or histora, a word that passed into Latin and acquired its modern meaning of "history"), being an investigation of the origins of the Greco-Persian Wars and including a wealth of geographical and ethnographical information. Although some of his stories were fanciful and others inaccurate, he claimed he was reporting only what had been told to him. Little is known of his personal history.

It was not until the time of Herodotus that gods began to have less influence upon history that was written, yet it was still implied because of the largely accepted view of the Greeks and the expectations that they may have had of how The Histories would be written. History was becoming more of a knowledge rather than an amusement. Because of Herodotus wanting people to accept what he had to write, he implemented stories that may have not directly correlated to gods, but rather implemented the idea that miracles or supernatural events took place. As was the story of Arion and the dolphin. While on a boat the men found out that Arion, who was a musician, was worth lots of money and decided to have him killed. The crew gave him two options, that either he jump ship or they kill him on the spot. Arion flung himself into the water and a dolphin carried him to shore.

Herodotus was more concerned with putting pleasure before knowledge, unless he did not believe that the gods had a dramatic influence on history and was rather just trying to please his audience. Like the story of the king having his servant look upon his naked wife, and when spotting him hiding, asked him to kill her husband.78 This, like many stories of Herodotus, are told in great detail, and for the simplicity of dramatic effect. This refers back to the way bards used to tell their poems or stories to their audience. Herodotus was accused by many because of such detailed accounts, and even called a liar by some. In his writing we can already see that there was no direct association with gods.